In the years since I have started the Jetsam largely to share some of the hundreds of tapes I collected in my years working in radio station production, I have focused on the national or US based creative for national sponsors of products.....


Recently, a largely regional, that turned national grocery chain decided to redo a TV spot they produced in the 1980s, called "Stars Of Christmas" People have such fond memories of this local TV ad as that was played to death for many years every holiday season that some people feel their Christmas isn't just right without it. Thanks to youtube, the memory continues long after it's off the air. If you have no idea what I am talking about, see it HERE!

I've got some local jingles that have not been heard in years, and in some cases DECADES since anyone else has heard them but me.

I've saved my share of tapes over the years....when I say "often rescued from the dumpster and tape eraser" I'm NOT kidding. Tapes have often been erased after airing, lost to those who can remember these quick little songs. My philosophy was if it catches my ear, I want a copy of it.

Jingle packages are especially interesting. Advertisers are putting a brand to a song that is meant to be an earworm to remember, yet they are discarded all too quick like the rest of radio commericals to be tossed. They are kept around however more then the rest as ad copy can be changed and the brand earworm remains. but, they too, often fade into the past.

The material over the next few posts collects some jingles local to my area of the Halifax Regional Municipality here in Nova Scotia Canada from the 1970s, 1980s and 1990s. That doesn't mean they were recorded here (though some were) but mainly local businesses in the area. Some are still in business, some are not, and even if you have never heard of them before, I think it's fair to say, they're catchy, like most jingles ever produced. Note selected cuts are available for listening here, not the entire package.

But first, some details regarding the terminology you'll hear here.

A "Full Sing" is a complete 30 or 60 sec jingle with lyrics that brands the product or service. These jingles are actually seldom heard complete on air, as usually the advertiser has an announcer with copy to read with the jingle. To hear these is rare outside the industry I used to work in.

A "Donut" or "Jingle with Donut" is not something you eat, but very much like the one you eat. It's a jingle that had only part singing, and somewhere in the middle there's just instrumental music so an announcer can read ad copy over the music, then the end part is the rest of the jingle. The fun part is getting the announcer to read the ad copy fast enough so he doesn't talk over the end part of the jingle....that can certainly cause a few outakes and 4 letter words when he reads it just a wee bit too slow.


Let's start off with one of the largest Malls in the area MIC MAC MALL. Crazy as it sounds, every christmas time for many years, this mall took another approach to the traditional mall santa, and created "Woody The Talking Christmas Tree" which took up massive space in center court with kids lining up to talk to Woody. The happened over many years, until it was abruptly ended a couple of years ago with the mall finally scrapping the tradition causing outrage with local people who grew up with Woody. The rage eventually died down. people moved on, but endearing memories of woody survive, as does this Christmas Concept package from likely the 2nd half of the 1980s (no specific date) You'll hear both the full sing and jingle with donut which includes 2 "woody" 60 sec spots. 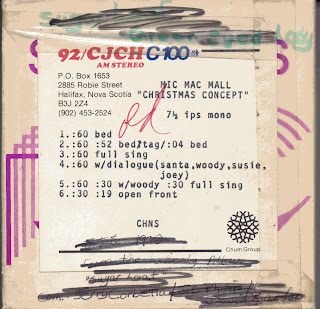 Halifax Shopping Centre was one of the first malls in the area, opening in 1962 at the site of the original airport and still thrives to this day, current under going major renovations (what mall doesn't do that regularly?) This jingle with donut was produced by Mark Century Corporation NYC in the late 1960s-early 1970s era, and certainly has the sound from then. I wish I had the exact date. 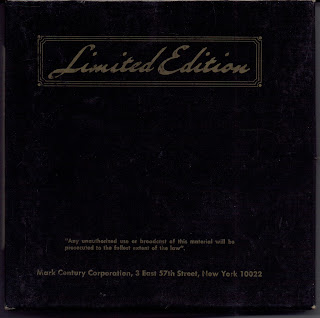 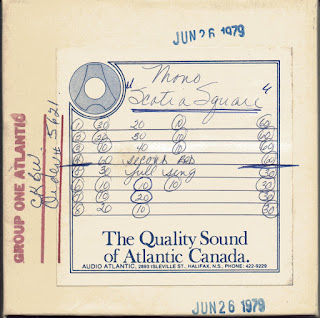 This jingle appears to be produced locally....Scotia Square is also involved with major renos right now. It used to be two levels of shops and services, but is now restricted to the lower level with offices taking the top level. Interesting how malls brag in their jingles what they are. For Scotia Square, I think they lay it on a big thick, but maybe that's just me. 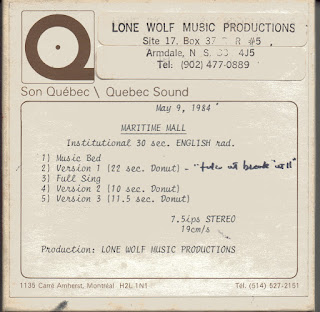 Another mall in downtown Halifax, Maritime Mall, sits below a massive office tower. Back in 1984 it was thriving, but has since been more office and empty space the last time I was there. Still very catchy. You could dance to this one...remix anybody? 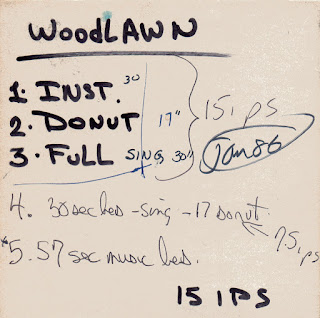 From 1986 comes this full sing from Woodlawn Mall. Like a lot of smaller malls in the area, this one was turned into a strip mall with numerous businesses and technically is still doing well, despite it being not as ear friendly (to put it politely) as a lot of the other jingles i've heard.


Finally, This is a unique one, taking the 80's "Hot Hot Hot" song by Buster Poindexter or Arrow and customizing it for a mall. did anyone pay royalties to the song's writer? We wonder...... 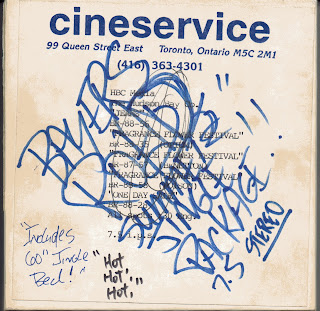 Feedback is encouraged below.....and let's face it, it drives me to do this, as it has taken more then a few hours this week to put this together and the future posts with transferring and scanning and well you get the idea. Stay tuned and check back....gotta go and bake some tapes.

Cheeze Pleeze - the Wacky, the Warped & the Weird... It's A Gouda Thing!

Promote Your Page Too